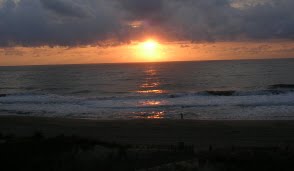 It’s been such a busy September that I haven’t even had time to post about my mini-vacation to Ocean City a week ago. It turned out to be a drab, cloudy, rainy three days set between week-long runs of sunny weather, but we had a great time. As you can see we had an oceanfront room, so I didn’t have to go far to get a great sunrise photo. 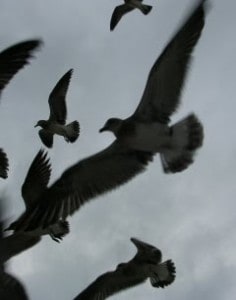 Also wanted to include this cute photo of seagulls being fed from below us. It always amazes me how quickly the flock goes from one or two to a couple of dozen!

I don’t know if it’s the historical fiction author in me or what, but I enjoy finding historic places no matter where I go. You might not think of Ocean City as being related to the Civil War, but you don’t have to travel very far to find some historic sites.

For instance, driving in, I saw a sign for Frederick Douglass’s birthplace and also a sign for Harriet Tubman – two great Civil War figures. I didn’t have time to visit them, but did make it over to a small town southwest of Ocean City, called Berlin. 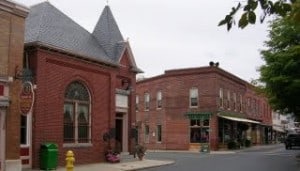 Berlin is a picture perfect little town with old brick buildings, stone churches and period wooden homes. The main route through the scenic downtown is the same path taken by Assateague and Pocomoke Indians long before the days of colonial settlers. Although not incorporated until 1868, it was a popular village beginning in the 1790s.

In the town, there are 47 structures that are noted in the National Register of Historic Places, and nearly two centuries of architectural heritage represented, dating from the Federal, Victorian and 20th Century periods. 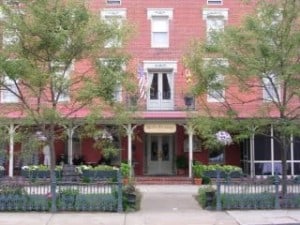 Did I mention shopping? Great antique stores, boutiques, art galleries and cafes can be found in Berlin – along with some B&B’s if you want to spend the night. The Atlantic Hotel (pictured left), is an 1895 building that is the cornerstone of the historic district.

Many of you may actually recognize the town. It was the main filming site for The Runaway Bride and Tuck Everlasting.

I enjoy the ocean, but seeing new historic sites and learning more about our country’s history is actually more enjoyable to me than beach time!