Some authors enjoy doing book signings at bookstores, but I prefer meeting people in a less formal venue while getting to see parts of the country that I might otherwise never get to see.

On Saturday I had the pleasure of doing a signing for my historical fiction novel Shades of Gray at the Ole Time Festival in historic Edinburg, Va. The Festival’s theme this year was the Civil War and featured events that showcased the War Between the States in music, dress, books, lectures and living history.

It turned out to be one of the best events I’ve ever attended. I’ve sold a few more books at others – but I had so much fun watching the parade, talking to residents and learning about Edinburg’s role in the Civil War that I almost forgot why I was there.

For those of you who are not familiar, Edinburg is located a few miles north of New Market, Va., in the beautiful Shenandoah Valley. (If you’re driving on I-81 through the Valley, get off and take Rt. 11 instead. You’ll see some beautiful country). 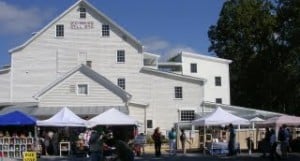 During Gen. Thomas J “Stonewall” Jackson’s 1862 Valley campaign, Confederate Col. Turner Ashby’s cavalry and Chew’s Battery halted Union Gen. Nathaniel Banks’s forces 28 times in April, and Confederate guns dueled with Union batteries across the center of the town. During their burning of the Shenandoah Valley (October, 1864), Gen. Philip H. Sheridan’s troops set the Edinburg Mill on fire, but extinguished it after two local girls protested. It is one of only a few establishments to have escaped the Union torch.

The mill was built in 1848 and was still in operation until the 1960s. It is currently undergoing renovations and will be the official Edinburg Visitor Center when completed. The town opened the doors of the mill for self tours during the Festival, and what a treat it was! As you can see from the picture, it is a sprawling building that really gives you a glimpse into our nation’s past. 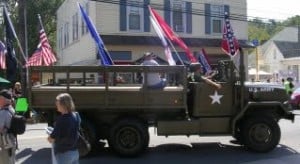 As I said, the parade was really fun, featuring local marching bands, antique cars, horses, beds on wheels (entrants for the Amazing Bed Race on Sunday), tractors, and floats.

Other events that took place over the weekend included a Sing Along, Old Timers’ Baseball Game, Karaoke, Civil War Fashion Show, Civil War Dance, Square Dance, and Civil War encampments. Oh, did I mention shopping? Of course there were tons of crafts and homemade goods, as well as great food.

It’s obvious the organizers spent a lot of time on this great event and that the community really joined together to make it a success. I’m marking my calendar for next year!

(I’ll be at another fun heritage event this Saturday, Sept. 26, in Warrenton, Va. – the Warrenton-Fauquier Heritage Festival)