Women soldiers in the Civil War

I’m reading a great book called, They Fought Like Demons: Women Soldiers in the Civil War by Deanne Blanton and Lauren M. Cook. As I was doing research for my historical fiction novel, I discovered a few women who dressed as men and fought as soldiers, but I am surprised by the number of them that Blanton and Cook have uncovered.

From the Battle of Bull Run (which took place July 21, 1861), to the end of the war – women fought, were wounded, and died on the battlefield beside their male counterparts.

One of the women who fought at Bull Run was Sarah Emma Edmonds (Pvt. Franklin Thompson of the 2nd Michigan). She published a memoir after the war, which I read while researching Shades of Gray. 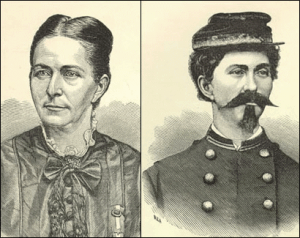 On the other side of the battlefield at Manassas was Cuba-born Loreta Janeta Velazquez (Lt. Harry T. Buford). She arrived at First Manassas as an independent officer, not regularly commissioned and without a command. Thanks to the confusion and disorganization that occurred early in the war, irregular soldiers were not uncommon. Velazquez attached herself to Gen. Barnard Bee’s command, and like Edmonds, made it through that first battle unharmed.

I am also in the process of reading Velazquez’ book, The Woman in Battle, and will share some of the amazing stories she relates in her memoirs. Some historians are of the opinion that Velazquez exaggerated her role, but many of her exploits can be verified by records and newspaper articles.