Fans did the talking during the Civil War 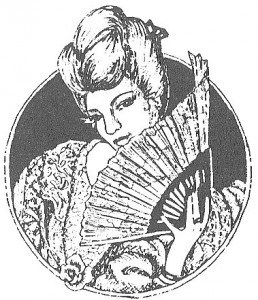 Today’s youth do most of their communicating with their fingertips through text messaging, but courtship during the Civil War era was a little more complicated. The etiquette and manners that men and women observed during the Victorian era is a far cry from what we are accustomed to now.

The fun part of writing historical fiction is uncovering these interesting rituals and customs. For instance, did you know that the way a young lady used her fan could convey a message to a male courting her?

From the speed of the fluttering fan – which could indicate anything from confusion to rage – to the way in which a lady snapped it closed – the language of fans spoke volumes.

Here are a few of the secret messages that could be expressed with fans:

The fan placed near the heart: You have won my love

Half-opened fan pressed to the lips: You may kiss me

Hiding the eyes behind an open fan: I love you

Opening and closing the fan several times: You are cruel

Fanning slowly: I am married

Fanning quickly: I am engaged

Twirling the fan in the left hand: You are being watched