“I have never, on the field of battle, sent you where I was unwilling to go myself; nor would I advise to go a course which I myself was unwilling to pursue. You have been good soldiers; you can be good citizens. Obey the laws, preserve your honor, and the Government to which you have surrendered can afford to be, and will be, magnanimous.”
– General Nathan Bedford Forrest 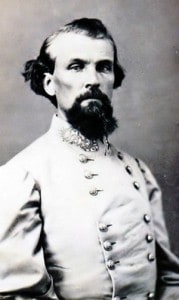 Since July 13 is the anniversary of the birthday of Confederate General Nathan Bedford Forrest, I wanted to share a few interesting stories about him – especially the great love story that grew out of a chance meeting with his future wife. Forrest was a colorful figure during the Civil War, and one who, in many regards, came away with a sullied reputation despite his many contributions.

A self-made millionaire planter and slave trader from Memphis, Forrest entered the Confederate Army a private and left a Lieutenant General of Cavalry. Despite being semi-literate and having never been formally schooled in military strategy, he is considered by many to be the greatest general of the War, on either side. His tactics are still studied to this day.

To get an understanding of the fear he struck into the hearts of his enemies, one must only read Shelby Foote’s version of what happened at a place called Fallen Timbers when Forrest met up with an advance unit of Grant’s army after the battle of Shiloh.

“Forrest saw his chance. ‘Charge!’ he shouted, and led his horsemen pounding down the slope. Most of the skirmishers had begun to run before he struck them, but those who stood were knocked sprawling by a blast from shotguns and revolvers. Beyond them, the Federal cavalry had panicked, firing their carbines wildly in the air. When they broke too, Forrest kept on after them, still brandishing his saber and crying ‘Charge! Charge!’ as he plowed into the solid ranks of the [infantry] brigade drawn up beyond.

The trouble was, he was charging by himself; the others, seeing the steady brigade front, had turned back and were already busy gathering up their 43 prisoners. Forrest was one gray uniform, high above a sea of blue …

As he came out the mass of dark blue uniforms and furious white faces, clearing a path with his saber, he reached down and grabbed one of the soldiers by the collar, swung him onto the rear of the horse, and galloped back to safety, using the Federal as a shield against the bullets fired after him. Once he was out of range, he flung the hapless fellow off and rode on up to the ridge where his men were waiting in open-mouthed amazement.” 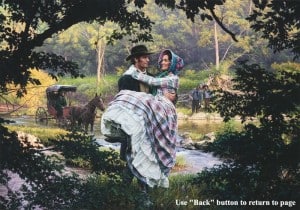 That was the fighting side of Gen. Forrest. As an historical fiction author, it is fun for me to find the romantic side – and General Forrest definitely had one, as evidenced by Civil War artist John Paul Strain’s painting, “Mary Ann.”

The story about how Forrest met his wife shows that even in his early 20’s, Forrest displayed the character, chivalry and powerful personality that later propelled him to become of the most successful cavalry commanders in the Civil War.

On a Sunday in the summer of 1845, Forrest met the daughter of a Presbyterian minister, Mary Ann Montgomery, and her mother while they were on their way to church. A couple of the local young men were on the river bank laughing and teasing Mary Ann and her mother after their buggy broken down in the middle of a stream. Bedford saw what had happened, dismounted, and immediately waded across the stream, carrying Mary Ann to safety and then rescuing her mother. Deciding that the boisterous jokesters needed to be taught a lesson, Bedford crossed the stream again and proceeded to thrash the young men.

After properly introducing himself, Bedford asked permission to call on Mary Ann. Impressed with his gallantry Mrs. Montgomery agreed. Bedford and Mary Ann were married six weeks later on September 25, 1845. And so began the life long love affair that would become part of the legend of General Nathan Bedford Forrest.

Forrest was well known as a horseman – in fact he had 29 of them shot out from under him during the Civil War. One of his favorites was named King Phillip. Over the course of the time I spent doing research for my Civil War novel Shades of Gray, I found many interesting stories about the horses of famous generals. Here is an account of an incident between Forrest’s horse and the Yankees.

“In August a troop of Federal cavalry was riding by Forrest’s place, as much out of curiosity to see him as for any more definite reason. The war horse King Phillip was grazing in the front lot. As the blue-clad cavalry filed into the lot on the way up to the house, King Phillip’s training in many a melee reasserted itself, and he rushed the bluecoats, teeth bared and front feet flailing. When some of the soldiers, astonished at his onslaught, struck at him, Forrest’s wartime body servant Jerry- whom the other Negro’s in the Forrest command had referred to, and obeyed, as “the Gin’ral”- rushed out to defend the horse. After Forrest himself had come out and the horse was back in the stable and things had quieted down, the Federal captain observed, “General, now I can account for your success. Your negroes fight for you, and your horses fight for you.”