Tribute to a Confederate hero

“With the bitterness of war all gone, there remains to Americans, North and South, a precious heritage of valor, of self-sacrifice, of sturdy, unflagging never-give-up spirit, a heritage which, in future days of possible stress, will prove inspiration unto us. Mosby is dead – peace to his ashes.” – Eulogy to Col. John Mosby, Richmond Virginian 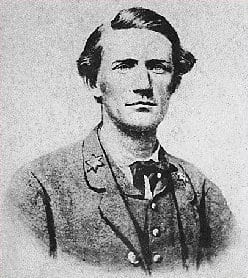 The timing of Memorial Day seems a little strange this year, as it usually falls around May 30, the date of Colonel John Mosby’s death in 1916 at the age of 82. For those of you who are not aware, Colonel Mosby was the inspiration for the main character in my historical fiction novel Shades of Gray, and remains today a legend that represents Southern honor and courage.

I usually make a trip to Mosby’s grave in Warrenton on the anniversary of his death, but since I cannot make it this year, thought I’d pay tribute to his heroic achievements through my blog.

The reason for Mosby’s historic legacy is really quite clear – he was one of the most successful guerrilla leaders during the Civil War – and really, throughout history. With fewer than 400 men at any one time (though with 1,570 enrolled by the end of the war), he suffered about 640 casualties, while killing, wounding or capturing at least 2,900 of the enemy – including generals and other high officers.

In order to rid the world of Mosby and his men, the Union army dispatched more than 70 missions, with most of the expeditions involving more than 200 men. Since one of Mosby’s goals was to neutralize as many of the enemy’s force as possible by diverting men from the front to guard the rear – his military tactics were an obvious success. During the battle of Gettysburg, for instance, he diverted 462 Union cavalry, 15 times his own strength, and at New Market, he drew 800 cavalry from Sigel’s army, four times his number. The Wagon Raid, one of his most notable achievements, diverted 1,800 infantry from the Battle of Third Winchester and Fisher’s Hill.

During the course of his illustrious career, Mosby and his men captured more than 3,500 horses and mules, a significant contribution to one of the Confederacy’s most severe shortages. One can only imagine the sight of the herds of horses tramping into Confederate camps and the boost they gave to Southern morale.

On June 19, 1920, a 25-foot granite monument was erected on the lawn beside the courthouse in Warrenton, Va. The inscription reads:

This tribute affectionately dedicated to Col. John S. Mosby, whose deeds of valor and heroic devotion to state and Southern principles are the pride and admiration of his soldier comrades and fellow countrymen.

He has left a name that will live till honor, virtue, courage, all, shall cease to claim the homage of the heart.