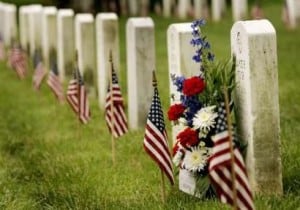 For the first time in a few years, I was unable to help place flags on the graves of veterans at Evergreen Cemetery in Gettysburg for Memorial Day. Unfortunately I had to work, and I really feel like I’ve missed out on something special. The cemetery has veterans from every war, including the War Between the States. (Notables from the Civil War – though not veterans – are Jennie Wade, the only civilian killed during the Battle, and 79-year-old resident John Burns, a veteran of the War of 1812 who grabbed his gun and fought beside the Iron Brigade, receiving three wounds).

To honor the soldiers’ gravesites with an American flag – no matter what the war – is a privilege for me, and I certainly hope I am able to continue the tradition next year. I would also love to visit Arlington over the Memorial Day holiday sometime as well. Every year since the late 1950s, soldiers of the 3rd U.S. Infantry place flags at each of the more than 260,000 gravestones. They then patrol the cemetery 24 hours a day for the rest of the long weekend, making sure that each flag remains standing.

Memorial Day itself has a Civil War connection. While Waterloo, N.Y., was officially declared the birthplace of Memorial Day by President Lyndon Johnson in May 1966, it’s difficult to prove conclusively the origins of the day. Women of the South began decorating the grave of their war dead in the 1860s, and Gen. Logan gave an official proclamation for the day in 1868.

To help re-educate and remind Americans of the true meaning of Memorial Day, the “National Moment of Remembrance” resolution was passed on December 2000 which asks that at 3 p.m. local time, for all Americans “To voluntarily and informally observe in their own way a Moment of remembrance and respect, pausing from whatever they are doing for a moment of silence.

I hope everyone remembers that, in addition to the brave souls who have given the ultimate sacrifice for this country, there of thousands of young men and women in harm’s way right now. This weekend is a time to remember those who died so that we might enjoy the rest and relaxation of a three-day holiday, as well as keep in mind those who risk their lives in the nation’s service.