Ford’s Theatre and The Civil War 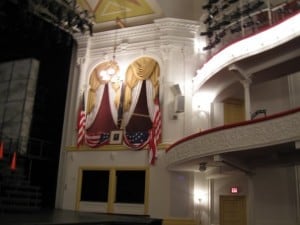 Had a great evening at Ford’s Theatre on Wednesday, being entertained by the legendary Michael Lanning and Michael ‘Tuba’ McKinsey in the musical production of The Civil War.

What a treat to sit in the front row on the balcony a few arms lengths from the booth where President Lincoln was shot.

For those of you who are not familiar with The Civil War, it toured nationally and then came to Gettysburg during the summer of 2005 as For the Glory. I quit my job as a newspaper editor to work as the spotlight operator for the show and had the privilege of working with the talented cast (and crew, of course).

The Civil War is a musical tribute that puts a human face on the American tragedy of the War Between the States. The songs and dialogue are inspired by the words of Walt Whitman, Frederick Douglass and Abraham Lincoln as well as the lives (as documented through letters, photographs, and journals) of ordinary people in extraordinary circumstances.

Drawing from the American musical genres of rock, country, gospel, folk, and rhythm and blues, The Civil War combines the stories of Union and Confederate soldiers, slaves, abolitionists and veterans. The intimate setting of Ford’s Theatre is a perfect venue for this show. If you’re in the Washington, D.C. area, stop by Ford’s Theatre for a historic and entertaining experience. 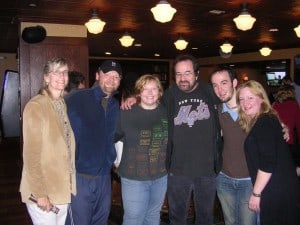 This is the still-soggy group at the bar after the show. From left: Jessica James, Michael “Tuba” McKinsey, Meghan Little, Michael Lanning, T.J. Ramaley, and House Manager Amanda Beck. (Thanks Amanda!) Not shown is Alice the GPS that took us on the longest route possible for the trip home. (A fun trip nonetheless).

Thanks to Meghan’s great driving skills we arrived safe and sound!