“Who will scorn or frown to see veterans of the South’s shattered armies unfurl that other banner, the riddled and blood-stained Stars and Bars, to look upon it and weep over it, and press it to their bosoms? For it is hallowed with recollections tender as the soldier’s last farewell. Then who will upbraid them if they sometimes bring it to light, sacrificed and glorified as it is by the blood and tears of the past and wave it proudly in the air…?”
— Confederate Veteran, 1897

Since Wednesday, March 4, is Confederate Flag Day, it seems like a great time to do a post on the history of the flag. Unfortunately, the banner under which the Confederate soldier fought is often maligned these days — largely by people or groups whose knowledge of American history is so distorted or inaccurate as to be cause for alarm.

In reality, there were three major “official” flags of the Confederate nation from 1861 to 1865. Many people only know of, and refer to, the “battle flag” – which was not a national flag at all. 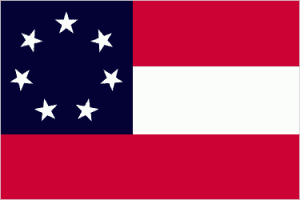 The Confederacy adopted the “Stars and Bars” as its national flag on March 4, 1861 (hence Confederate Flag Day). The seven stars on the First National flag represented the original Confederate states of South Carolina, Mississippi, Florida, Alabama, Georgia, Louisiana, and Texas. More stars were added, up to 13, as other states joined the Confederacy.

As you can see from the picture, the pattern and colors of this flag made it difficult to distinguish from the Stars and Stripes of the Union, causing considerable confusion on the battlefield. This flag design was only used until May of 1863.

Because of the confusion, General P.G.T. Beauregard asked Congress to change the First National Flag. In addition, a congressman suggested that the Army adopt a distinctive battle flag for its own use, the design being one of those that had been turned down in favor of the First National. This flag was red with a blue cross and white stars, and was first issued in November of 1861. Referred to as the “Southern Cross,” the flag had 13 total stars, 12 stars for the states currently in the Confederacy, and one for Missouri, which had seceded, but was not yet admitted.

Still wanting an improved National flag in addition to the battle flag, the Confederacy went on to adopt the Second National Confederate Flag. This flag was referred to as the “Stainless Banner” because of it’s pure white field, said to represent the purity of the Cause which it represented. It incorporated the Southern Cross in its design because so many soldiers had already shed their blood fighting under the Battle flag.

Interesting note: One of the first uses for the Second National flag was to drape the coffin of General Thomas J. “Stonewall” Jackson, who died after being mortally wounded by friendly fire at the Wilderness.

The National flags of the Confederacy are almost forgotten today, the battle flag of the Army of Northern Virginia having become the symbol most associated with the C.S.A. Hopefully through education – and even historical fiction such as Shades of Gray – the true history and heritage of those who served under these flags in unselfish regard for duty can be taught.

If you would like to learn more about the symbols of the Confederacy, I urge you to visit the Confederate Colonel and take a look at their Confederate Flag Etiquette page. This website is an online community that exemplifies the “new life of the Old South.”

Thanks to the Confederate Colonel website, I was able to find the perfect ending for my post from their quote page: