One of the many benefits to come out of book signings is the wonderful people I get to meet. The signing I did at Historic Blenheim in Fairfax, Va. is certainly no exception.

Mentioning to one visitor that the main character in Shades of Gray is based loosely on Colonel John S. Mosby, we began to chat about different “Mosby” landmarks, including Mosby’s Rock, which is one of the few sites I have been unable to find and visit personally.

This kind Virginian took the time to write down precise directions to the historical site, which is now located in the common area of a townhouse development (ugh). I thought that was the end of the story, but this gentleman went another step by tracking down my email address and sending pictures. (Which is good, because after getting lost in Fairfax on my home from the signing, and seeing the development around this wonderful historic landmark, I don’t think it is one I will take the time to visit). 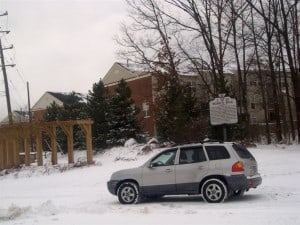 He sent some photos with and without snow, but I wanted to post one that shows the Historic Marker and the development in the background. The inscription on the sign reads:

Mosby’s Rangers (43d Bn., Va. Cav.) used this rock as a rendezvous point and met here to divide the spoils after raids. The renowned Southern spy and scout Laura Ratcliffe, who lived nearby, showed this rock to Col. (then Captain) John S. Mosby, CSA, in 1863, and suggested he use it as a meeting place.

The story behind Laura Ratcliffe and her exploits, as well as her relationship with Mosby and General J.E.B. Stuart, will provide great fodder for a future post. She is an exceptionally interesting character, and her story continues to have great relevance as preservation groups work to save her home, Merrybrook. As a tease, John Mosby credits her for saving his life and the lives of his men after she warned him of a planned Union ambush. Miss Ratcliffe – and the “Rock” – just might lay the groundwork for a future historical fiction novel… 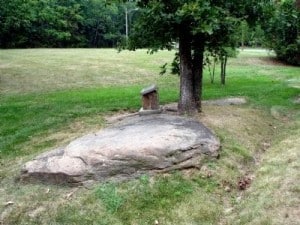 I was able to find an additional photo on the Internet of Mosby’s Rock, obviously taken before some of the destructive development began.

I certainly want to express my gratitude once again to Mr. Costanzo for the photos, and for taking the time to write down the directions. I hope the residents of the townhouses realize the great acts of courage and heroism that took place in their backyard.