One of the little perks I get for living in an historic area like Gettysburg is to have the opportunity to pass Civil War landmarks during my everyday travels.

I found myself in that circumstance last week when a shortcut to an appointment took me across the area of Pickett’s Charge and right by the Peach Orchard. I don’t know about other historical fiction authors, but I find I get great inspiration by visiting battlefields, so on this day, I decided to make a slight detour and ended up at Devil’s Den. (Usually I end up on Little Round Top, and spent many, many hours there in all types of weather while writing Shades of Gray.) 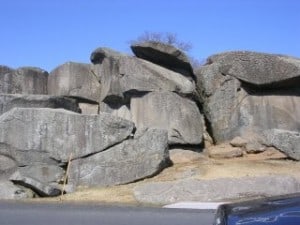 Students of the Battle of Gettysburg know all about Devil’s Den, but for those who have never heard of it, I took some photos to share. Over the years, Devil’s Den has been a favorite site for youngsters to visit because they can climb on the rocks and play hide and seek. Little do they know of the significance of what took place there.

Devil’s Den is located about 900 yards west of Little Round Top, and was considered a curiosity by local residents long before the battle. On July 2, the huge granite formations provided height and protection for the Union battery placed there, but there was a major weakness. Only four of six guns would fit among the rocks and there was no place to safely park the artillery limbers that carried the ammunition chests. With guns and gunners crowding the summit, there was also little room for anything else, including infantry support. Of course, the Union officers hoped that if the Confederates attacked, they would do so on the west side through a triangular field and not from another direction.

(As a side note, this triangular field is now a favorite spot for ghost hunters, and I have seen many “orbs” in photos taken here). 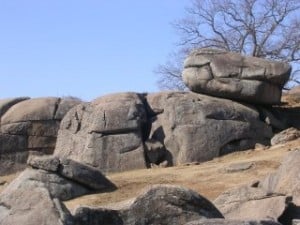 Unfortunately, the Union’s worst fears came true when Confederates struck the den from three directions at once.

Not shown in the photo is that even the pastures around the base of the Den are filled with piles of rocks and large boulders that caused battle formations to divide and fall apart. Officers lost control of their commands and soldiers lost their way in this wild garden of stone.

Here is how one of the Southern veterans described the ground at Devil’s Den.

“… a wild, rocky labyrinth which, from its weird, uncanny features, has long been called by the people of the vicinity the ‘Devils Den.’ Large rocks from six to fifteen feet high are thrown together in confusion over a considerable area and yet so disposed as to leave everywhere among them siding passages carpeted with moss. Many of the recesses are never visited by the sunshine, and a cavernous coolness pervades the air within it.”

I urge you to read about the heroic attacks and counter attacks on this ground – all performed under a hot July sun. Eventually, the outnumbered Union troops were forced to retreat, and a wing of the 44th Alabama rushed to the summit of Devil’s Den and planted the regiment’s flag among the boulders.

After the battle, the area between Devil’s Den and the Round Tops was nicknamed “The Slaughter Pen” and Plum Run Valley referred to as the “Valley of Death.” The names have remained to this very day.