Presidential inaugurations: A look back 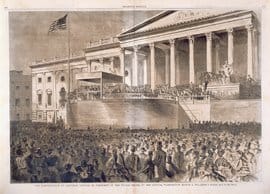 Since we are one week away from a historic Presidential Inauguration, I thought it would be interesting to look back at the customs and history of Inauguration Day. Rather than go into all the background, I’ve picked out a few odds and ends that I found interesting about this American tradition. (Photo is of Lincoln’s 1861 Inauguration).

I found that the Inauguration Day speech goes all the way back to our first president, George Washington. After taking his oath of office on the balcony of Federal Hall in New York City (April 30, 1789), Washington proceeded to the Senate chamber where he read a speech in front of Congress and other dignitaries. His second Inauguration took place in Philadelphia on March 4, 1793, in the Senate chamber of Congress Hall.

In this second speech, Washington holds the record for the shortest Inaugural speech – just 135 words. (See record for longest speech below).

One of the most quoted speeches is Abraham Lincoln’s, given in 1865 at the close of the Civil War. “With malice toward none, with charity for all, with firmness in the right as God gives us to see the right, let us strive on to finish the work we are in, to bind up the nation’s wounds, to care for him who shall have borne the battle and for his widow and his orphan, to do all which may achieve and cherish a just and lasting peace among ourselves and with all nations.”

Another often-quoted phrase is from Franklin D. Roosevelt in 1933: “We have nothing to fear but fear itself.” And John Kennedy in 1961: “And so my fellow Americans, ask not what your country can do for you – ask what you can do for your country.”

One other Civil War-related piece of information: The coldest Inauguration Day was for Ulysses S. Grant (a Civil War general). On March 4, 1873, the noon temperature was 16°F, with wind gusts up to 40 mph.

William Henry Harrison delivered the longest Inaugural address, at 8,445 words, on March 4, 1841, a bitterly cold, wet day. He died one month later of pneumonia, believed to have been brought on by prolonged exposure to the elements on his Inauguration Day.

After Washington’s second Inaugural address, the next shortest was Franklin D. Roosevelt’s fourth address on January 20, 1945, at just 559 words. Roosevelt had chosen to have a simple Inauguration at the White House in light of the nation’s involvement in World War II.

Next blog topic: The Inaugural Ball.