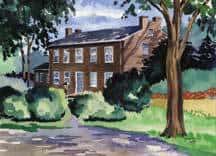 I always get excited when I’m invited to a historic venue for a book signing, and could not be more pleased to be attending a Civil War author Meet and Greet at Historic Blenheim in Fairfax, Va., on Feb. 21.

I don’t know about anyone else, but I had never heard about this historic site before being invited, so I thought I’d share what I found.

If The Walls Could Talk …

Well, in this case they do. Historic Blenheim is a circa 1855 brick house that contains one of the most voluminous and best-preserved examples of Civil War graffiti in the nation, thanks to some of the 1,700 soldiers who were sick and/or recovering from diseases and wounds in the Fairfax area. This “diary on walls” now provides insight into typical soldier life during the Civil War.

The property is said to have been traversed by soldiers from at least 22 different regiments of the Union Army – including the 18th Pennsylvania Cavalry on their way to Gettysburg. Most of the markings on the first floor walls were destroyed by years of painting and plastering, but the second floor and attic are mostly untouched.

Before being bought by the City of Fairfax in 1999, the property was owned by Barbara Scott, the last remaining descendant of the original owner, Albert Willcoxon. (Willcoxon was actually a proud Confederate who voted along with 77 percent of Fairfax County to secede from the Union). When Scott died, several developers lined up to buy the property and build new residential housing. Neighbors of the house formed Historic Fairfax City Inc. and drummed up support and funding for the current Civil War house museum and park.

The $1.1 million Interpretive Center replicates the atmosphere of the attic with similar lighting and digitally recreated signatures of the soldiers. Inscriptions include those from Massachusetts, Michigan, New Jersey, New York, Pennsylvania and Wisconsin.

Historians have matched the names and signatures on the walls with service and pension records so that visitors will know what happened to the soldiers before they arrived and what their fate was upon leaving.

“Four month: no money, no whiskey, no friends, no rations, no peas, no beans, no pants, no patriotism.”

I will be signing copies of Shades of Gray between noon and 4 p.m. on Feb. 21 Come out and see this historic treasure!