“Do your duty in all things. You cannot do more, you should never wish to do less.” – Robert E. Lee 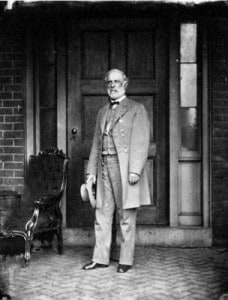 To help celebrate both anniversaries, I am offering 10 percent off signed copies of Shades of Gray for one day only. And to help educate those who are not familiar with the great Christian spirit of Robert E. Lee, I am re-printing a famous letter written by President Dwight D. Eisenhower in response to one he received dated August 1, 1960, from Leon W. Scott, a dentist in New Rochelle, N.Y.

Unfortunately, there are still those today as uninformed and misled as poor Mr. Scott, so Eisenhower’s letter is a great way to set the historical record straight.

“At the Republican Convention I heard you mention that you have the pictures of four (4) great Americans in your office, and that included in these is a picture of Robert E. Lee.

“I do not understand how any American can include Robert E. Lee as a person to be emulated, and why the President of the United States of America should do so is certainly beyond me.

“The most outstanding thing that Robert E. Lee did was to devote his best efforts to the destruction of the United States Government, and I am sure that you do not say that a person who tries to destroy our Government is worthy of being hailed as one of our heroes.

“Will you please tell me just why you hold him in such high esteem?

Respecting your August 1 inquiry calling attention to my often expressed admiration for General Robert E. Lee, I would say, first, that we need to understand that at the time of the War Between the States the issue of Secession had remained unresolved for more than 70 years. Men of probity, character, public standing and unquestioned loyalty, both North and South, had disagreed over this issue as a matter of principle from the day our Constitution was adopted.

General Robert E. Lee was, in my estimation, one of the supremely gifted men produced by our Nation. He believed unswervingly in the Constitutional validity of his cause which until 1865 was still an arguable question in America; he was thoughtful yet demanding of his officers and men, forbearing with captured enemies but ingenious, unrelenting and personally courageous in battle, and never disheartened by a reverse or obstacle. Through all his many trials, he remained selfless almost to a fault and unfailing in his belief in God. Taken altogether, he was noble as a leader and as a man, and unsullied as I read the pages of our history.

From deep conviction I simply say this: a nation of men of Lee’s caliber would be unconquerable in spirit and soul. Indeed, to the degree that present-day American youth will strive to emulate his rare qualities, including his devotion to this land as revealed in his painstaking efforts to help heal the nation’s wounds once the bitter struggle was over, we, in our own time of danger in a divided world, will be strengthened and our love of freedom sustained.

Such are the reasons that I proudly display the picture of this great American on my office wall.

The 10 percent discount is good for one day only, by emailing me at writefromthepast (at) yahoo (dot) com.