Santa Claus and the Civil War 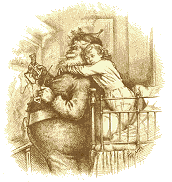 As we close in on the Christmas holiday, I thought I’d share a little information that I discovered while doing research for my Civil War novel Shades of Gray.

When I was getting the manuscript critiqued before publication, I had so many readers question a comment about Santa Claus that I removed it altogether. I knew it was historically accurate, but since so many people did not know that Santa was around during the War Between the States, I decided to take it out. For those who don’t know Santa’s origins in the United States, here is what I found.

As early as 1773 there is a reference to “St. A. Claus” from the Dutch legend of Sinter Klaas. But the reason I knew I was correct in referring to Santa Claus in the 1860s is because the poem, Twas the Night Before Christmas, was published in 1823. In the poem, writer Clement Clark Moore adds to the folklore by including names of Santa’s reindeer, his laugh and winks, and the method by which he returns up the chimney (Remember? Lays his finger aside of his nose).

That American image of Santa Claus was further enhanced in the 1860s by illustrator Thomas Nast, a German immigrant, who depicted a rotund Santa for the Christmas issue of Harper’s magazine. Nast added details of Santa’s workshop at the North Pole and his list of good and bad children. (By the way, Rudolph didn’t come about until 1939 in an advertising campaign by Montgomery Ward Company).

A Christmas Carol, published in 1843 by Charles Dickens, is credited with changing the philosophy of the holiday to one of family, goodwill and charity to others.

Christmas was declared a national holiday in 1870 by President Ulysses S. Grant.

Ending Tidbit: First line of A Christmas Carol: “Bah! Humbug!”
Last Line: “Merry Christmas, and may God Bless us, everyone!”