I’ve been wanting to write about the newest member of my family for some time now. Since it’s the middle of a busy work week, now is as good a time as any.

First, for a little background, I live on a fairly secluded patch of land that is mostly wooded and hides a number of dumps where the residents of the neighborhood disposed of their trash decades ago. Every fall and through the winter (in other words, when it gets cold enough that I won’t disturb any snakes), Tara (my dog) and I go to the dump with garbage bags and boxes. I load up my Jeep one bag at a time and put it out for garbage pickup – except in the case of large truck hoods or car seats, in which case I take them to a place that recycles what they can.

Anyway, about two winters ago, I began to see this animal run past out of the corner of my eye – and could not, for the longest time, figure out what it was. Then I began to see a gray cat down closer to the house in one of the sheds. He would disappear so quickly I could never really get a good look at him, but I assumed it was the same animal. 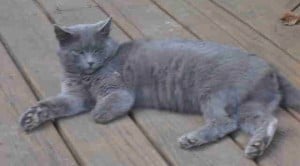 One day, while sitting in my house, I saw this pathetic three-legged cat come hesitantly up to where I had put some food out for my own cats. As soon as I stood up to get a better look, he was gone again.

I spent the rest of the winter putting food out on the back porch. I didn’t see the cat for weeks, but the food was always gone. Eventually, after a few months, I could get him to come up on the porch at night with me right inside the sliding glass door – literally inches away, yet he knew he was safe. Still, one false move and he was gone in a flash.

To make a very, very long story short, it took a full year for me to be able to touch this cat. I never made a move toward him, but did begin to sit quietly outside while he was eating. The distance between us slowly got shorter, and then one day his head brushed my hand as I was putting food in his bowl. From that day on he made sure his head hit my hand every day, and after another week or so, I was able to rub his head

It’s been about two years now since I first saw that little three-legged stray, and this poor, wild cat is now sleeping upside down on the couch beside my dog. He watches how my other two cats interact with each other and me, and copies every movement. (He can jump off the arm of a couch and ambush one of them in such a way that you would never know he only has three legs).

“Mookie” has been neutered and has all his shots, and sits in line to be brushed. Actually, when he sees me pick up the dog brush he practically chases me down to be first. He is very affectionate and loving and I don’t know what I would do without him.

There is a chill in the air today. Maybe tomorrow I’ll head to the dump…