Book-signing event a step back in time

My Friday book signing in Waterford, Va. at the 65th annual Waterford Homes Tour and Crafts Exhibit started out with a nice writeup in the Loudoun edition of the Washington Post. (It’s nice to get publicity with good timing, though I’m not sure it helped).

I was cautiously optimistic about having a good day because the forecast was for sunny skies and moderate temperatures (see my earlier post on a book signing with the opposite forecast). It actually turned out to be a fabulous day, and I highly recommend this fair to everyone who loves history and shopping! The village of Waterford, with its rolling fields and historic buildings looks much the same as it did 100 years ago. The magnificent homes are just jaw-dropping for someone who loves historic houses. (hmmm, who would that be?)

The entire village of Waterford is shut down for this event which features food vendors, live entertainment, and more than 140 juried craftsmen demonstrating their skills and giving hands-on demonstrations. 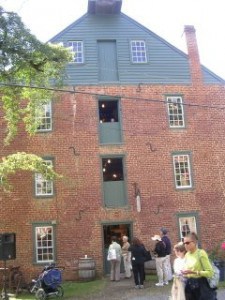 I, unfortunately, had very limited time after my book signing to walk around because I had to be at work in Pennsylvania. As I look back, it’s a little strange that the first building I snapped a picture of was the “Old Mill,” when there are so many beautiful, old, exquisite buildings in Waterford. Now I am sitting here reading about the history of the Craft Fair and find that the Old Mill was the hub and heart and reason for the town — and the Craft Fair. Waterford was settled in 1733 by Amos Janney, a Quaker from Bucks County, Pa. Because the Quakers were cereal farmers, a grist mill was very important to them (hence the mill). The settlement that would become Waterford grew around Janney’s Mill.

As for the Craft Fair, Waterford was apparently very run down in the 1940s. A group of citizens got together and finally decided the Old Mill would be the centerpiece of whatever they did. On Sept. 15, 1944, they opened the mill’s doors to 500 people and sold $90 worth of crafts. Today the fair takes place throughout the entire town and attracts more than 30,000 people over three days. 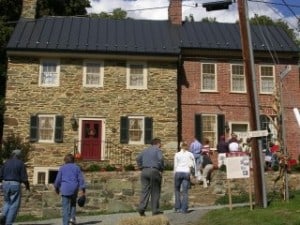 Now my picture-taking gets even stranger because the only other house in the whole town that I took a picture of with my limited time was this one (which wasn’t on the main road I was on). The stone portion just happens to be one of the oldest structures in Waterford. It was reportedly built by Mahlon Janney, son of the village founder, around 1762.

In 1850, Samuel C. Means bought the house. Though not a Quaker, Means married Quaker neighbor Rachel Bond in 1855. Early in the Civil War, he rejected Confederate offers to join the Cause (in which one of his brothers served and died), and was later commissioned a captain in the Union army. He raised a cavalry company called the Independent Loudoun Rangers, which was one of the only organized units of Virginians to fight for the Union – and, for a time, was a bothersome foe for John S. Mosby who, of course, was the basis for my main character in Shades of Gray, Colonel Alexander Hunter.

See why this is so strange? I have read many, many stories about Captain Means. To have chosen his house to take a picture of gives me goosebumps, yet things like this happened all through the writing and research period of Shades of Gray, so I shouldn’t be surprised. 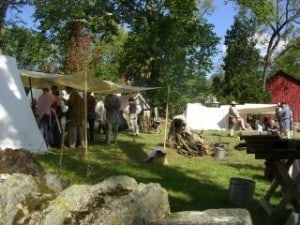 I snapped this final picture because I am so accustomed to seeing Civil War encampments in Gettysburg. It’s not very good, but it’s a Revolutionary War encampment.

If you live anywhere near northern Virginia you should put this fair on your calendar. It appears to be a great educational event for children and makes a wonderful experience for anyone who appreciates our nations history.