A real walk in the past lane

If you read my “Glamorous Life” blog post you know I had a book signing in the beautiful Virginia town of Warrenton last Saturday. While there, I took some pictures of houses that I have passed hundreds of times, but like most people, never really stopped to think about their historical significance or their connection to Col. John S. Mosby.

For those who don’t know, Warrenton is the county seat of Fauquier County, Va., and was the site of many skirmishes and battles during the War Between the States. It was also the object of many raids by Col. Mosby, also known as the “Gray Ghost,” who is the real-life officer that my character Col. Alexander Hunter in Shades of Gray is based upon. After the war, Mosby settled in Warrenton and practiced law. 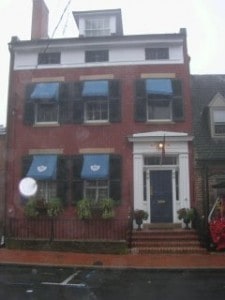 The first photo I took was of the Beckham house on Culpeper Street. Mosby took Gen. Stoughton to this house on the morning of March 9, 1863, after capturing him from his bed during the famous Fairfax Courthouse Raid. Even though he was an enemy officer, Gen. Stoughton was welcomed by the Beckham family because the owner’s son was a graduate of West Point and Stoughton was a classmate. From this house in Warrenton, Mosby took Stoughton to Culpeper, where he was turned over to another friend, General Fitzhugh Lee.
As a sidenote, Robert F. Beckham, the son who knew Stoughton, assumed command of the Stuart Horse Artillery following the death of the gallant John Pelham at Kelly’s Ford. He was later transferred and died in the Battle of Franklin, Tenn.
(By the way, the circle of light on the bottom left of the photo is not an orb – it was raining). 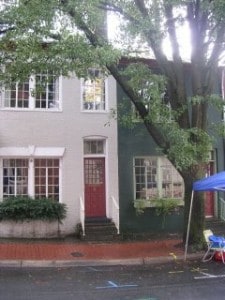 Just a few doors up from the Beckham house is another historic house that was a barbershop during the Civil War. In the book Ranger Mosby, Virgil Carrington Jones describes an incident in which Mosby was being shaved while Union troops occupied the town. Actually, they were not only occupying the town, they were turning it upside down searching for him. As the story goes, a Union officer came into the barbershop and questioned Mosby while he was sitting in the barber’s chair. He acted unconcerned, made up a fictitious name and story, and escaped capture once again. 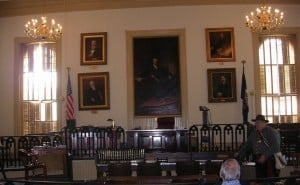 Out on Main Street is the iconic old Warrenton Courthouse where Mosby argued many of his cases in the courtroom after The War Between the States. For the first time, I was actually able to go into that courtroom! I also didn’t realize it while I was in Warrenton, but one of the buildings that I passed while walking around town, The California Building, is where Mosby located his law office. I’ll have to grab a photo of that one next time I am down there. 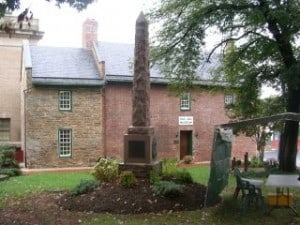 This next picture is of the Old Gaol Museum, which dates to 1808, and the Mosby Monument, which stands in the yard of the courthouse. The old jail is now a museum that houses several items relating to Colonel Mosby and his Rangers. The monument to Mosby states: “He has left a name that will live till honor, virtue, courage all shall cease to claim the homage of the heart. John Singleton Mosby, lawyer, soldier, patriot.” (Sounds like the perfect tribute to Col. Alexander Hunter to me).
The monument was dedicated on June 26, 1920. 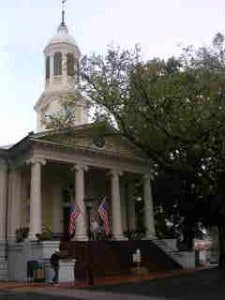 I also wanted to post a photo of the outside of the Courthouse because it’s such a beautiful building and it is so very noticeable when you drive into Warrenton. There have actually been seven courthouses in Warrenton. Since 1795, four have stood on the same site on Main Street as the existing Old Courthouse, which was built in 1890. Fire destroyed some of the earlier structures.

In earlier blogs, I have posted photos of Mosby’s home and his gravesite, as well as the beautiful Warren Green Hotel where he stopped to eat with 15 of his men on Jan. 18, 1863, the beginning of his partisan career. He also frequently ate there when he was a practicing attorney in Warrenton. 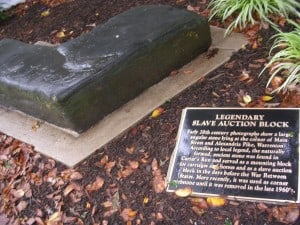 The last photo I took is not Mosby related, but it certainly brought a rush of feeling. It’s a large, L-shaped stone with a plaque that reads: “Early 20th century photographs show a large, angular stone lying at the corner of Main Street and Alexandria Pike, Warrenton. According to local legend, the naturally formed ancient stone was found in Carter’s Run and served as a mounting block for carriages and horses and as a slave auction block in the days before The War Between the States. More recently, it was used as a corner curbstone, until it was removed in the late 1960s.”

If you ever have the opportunity to visit Warrenton, I highly recommend it. This quaint, historic town still has within it the tradition and charm of a bygone era. It’s one of those small towns where you want to park the car and get out and walk. If you like history, you won’t be disappointed!