Sept. 1, 2008
As most Civil War buffs know, there is just something about standing on the actual spot where events occurred that transforms words in a history book into something real and tangible. 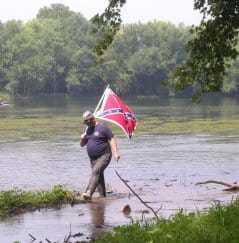 Such was the case on Saturday, Aug. 30, when I took part in the 10th Annual Potomac River Crossing at White’s (Conrad’s) Ford, to commemorate the 1862 crossing of General Lee’s Army of Northern Virginia into Maryland.

Sponsored by the Sons of Confederate Veterans, Maryland Division Colonel William Norris Camp #1398, the event was a great day of fellowship, history and good Southern cooking. (Many thanks to Jonny O’s BBQ catering for the pulled pork sandwiches and barbequed chicken).

Even though it had rained fairly heavily in Gettysburg the two days preceding the river crossing, I decided that nothing was going to stop me from walking across that river. So when I found out there was about a mile walk to get from the parking lot to the river, I was not the least bit concerned. The navigation down the riverbank into the muck and the mud of the Maryland side of the Potomac, likewise, did not lessen my enthusiasm. Bustling over with the excitement of the day and talking to new friends, I didn’t really think about the actual mechanics of walking across a river … until I was maybe a quarter of the way across and looked up at that far-off bank …

The actual crossing of General Lee’s army took place in September of 1862 after they had defeated the Army of the Potomac in the Second Battle of Bull Run. Over three days, Lee moved 30,000 men and 246 cannon across the Potomac—though not all at White’s Ford. Lee split the army, some crossing at Point of Rocks, some at Noland’s Ferry and still others at Cheek’s Ford.

At White’s Ford, on the very ground (and rocks) on which I stood, Stonewall Jackson’s Command crossed on Sept. 5, followed by J.E.B. Stuart’s Cavalry Division. The next day, James Longstreet’s Command along with McLaws and Anderson’s Divisions crossed there. So I stood in the footsteps of some pretty good company, and I had only to lift my eyes and watch the swaying of a Confederate flag in front of me to help me stay focused on my goal.

The veterans of the river crossing told us that last year the water was up to their chest. This year, the highest point was high-thigh deep, though the combination of the current and the rocks made walking the direction I wanted to go a little challenging. In any event, once I made it half-way across I came to the realization that I may as well keep going, and really, the last half wasn’t all that bad. After wading up onto the Southern side of the river and placing my feet on the sacred soil of Virginia, I was soon energized for the walk back.

Just before getting back to the Maryland side, we ran into a British lady who had been held up by a detour and was getting a late start. I handed her my walking stick for her journey across, as she was determined to do it—even if alone. In the brief few minutes that I talked to her, she said she had six ancestors in the Civil War—all Confederate.

The walk back to the parking lot was a leisurely one. I did much of it alone in order to soak up the beauty of my surroundings. I was especially interested in checking out Lock #26 of the C&O Canal, which I had passed on the way in. Being an admirer of Jeb Stuart, I knew a little more about his hurried crossing at White’s Ford in October of 1862 than I did of Lee’s crossing in September. Stuart’s passage came after his raid into Chambersburg, and was made under great pressure from pursuing Federal forces.

With his rearguard in imminent danger of being cut off, Stuart placed John Pelham with one gun to hold off the attacking force long enough to get the lagging rearguard across. John Blackford, who went out in search of the lost rearguard and directed them to hurry upon finding them, writes in his book War Years with Jeb Stuart, “We could hear the boom of Pelham’s gun in the distance, and as long as that continued in action, I knew the way was still open.” As the rearguard rode toward White’s Ford, Blackford says, “There stood Pelham with his one gun on the towpath of the canal, holding open the gap.” 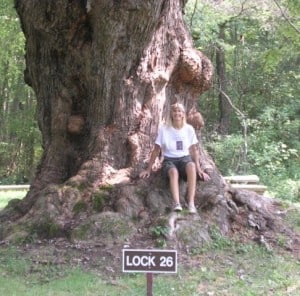 That towpath is the path I walked to the river and back. And Lock #26, where a huge tree still stands, is the area where Pelham had placed his gun.

Blackford continues, “We were not half across when the bank we had left was swarming with the enemy who opened a galling fire upon us, the bullets splashing the water around us like a shower of rain.”

The only thing missing from my wonderful river crossing experience was the hailstorm of lead—but I think I would like to pass on that anyway.

The members of the William Norris Camp were great hosts and I highly recommend this annual event to anyone who enjoys walking in the footsteps of history.