A May Visit to Mosby Country

I made a hurried two-day trip to Virginia on Thursday and Friday which included stops in Winchester, Front Royal, New Market, Warrenton and Delaplaine. 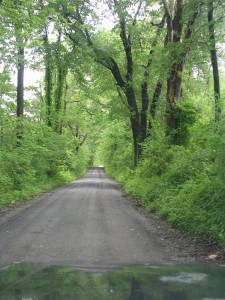 I made it a point to stop at some of my favorite Mosby spots and take some pictures for those who don’t live close enough to experience them for themselves. I was very disappointed when I tried to re-find “Heartland,” the home of Joseph “The Chief” Blackwell that served as Mosby’s unofficial headquarters. Burned to the ground by the Yankees, only a stone chimney remained. It is very difficult to find as it is not visible from the “main road.” (See photo of Main Road, above). 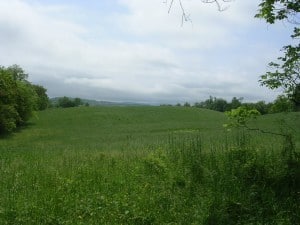 Unfortunately, since the last time I visited, the land surrounding Heartland has become home to 50-acre estates. I am hoping, however, that the chimney still stands and is just invisible due to the the lushness of the landscape. I was close enough to know that it lies just on the other side of this hill. You can almost imagine a band of riders racing across that field. (Which reminds me, a big, red fox ran out in front of me when I was just a few hundred yards from where the chimney should have been).

I snapped a shot of Brookside, which became the headquarters of Mosby after the burning of Heartland, but see that I didn’t download it. If anyone wants to see it, let me know and I’ll post it. 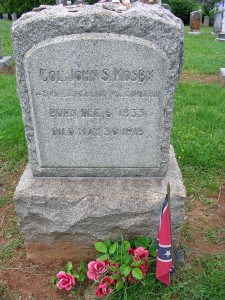 My first stop in Warrenton, as always, was to the cemetery. I try to go every May around Memorial Day and place flags on the graves of Mosby and Capt. Richard Montjoy (whose grave seems to be often ignored). However, this year I could not find any flags that were not made in China, so did not purchase any. 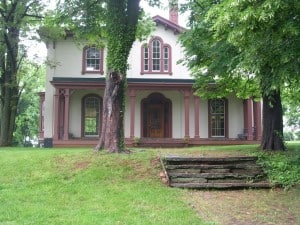 I also visited Mosby’s house on Main Street, which is currently being renovated by the Mosby Foundation to become the Mosby Museum sometime this fall. They have done a fantastic job painting and improving the outside since I was there last. It looks ready to go, but I am sure there is much to do on the inside. While in Warrenton, I also visited the JailHouse Museum and took a picture of the Mosby Monument right outside the courthouse (which I also did not download apparently) 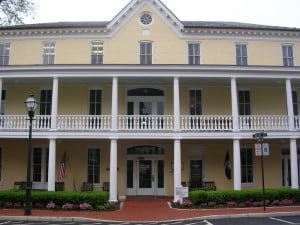 The next stop on our picture tour is the Warren-Green Hotel where Mosby and fifteen of his men stopped to eat on their way from Fredericksburg to the Northern Virginia area to begin partisan operations in January of 1863. General McClellan also gave his farewell speech here after learning that Lincoln had replaced him. It is now county offices.

Walking down the sidestreets of Warrenton, I remembered a story about Mosby being in town getting a shave while it was under Federal occupation (and while they were scouring the town for him). He was even questioned while on the barber’s chair by a Union soldier, but provided a fictitious name and escaped capture. I took a picture of the building I thought it was – and I was right. Unfortunately, I did not download it. Again, if someone is interested in seeing it, I would be glad to put it up. 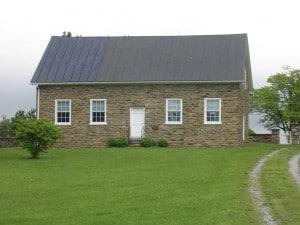 I took this photo on my home and almost blew right by it. It’s Ebenezer Church where Mosby and his men divided the loot($173,000) from the Greenback Raid in October of 1864. This church is located on Green Garden Road, which is also the road on which Major “Dolly” Richards lived. I came out above it or would have taken a photo of his house “Green Garden,” which is now a private residence. 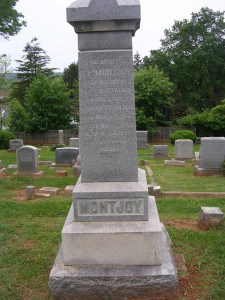 On my next trip, I will try to take a picture of the Hathaway house where Mosby had to escape with the help of a walnut tree. The tree is still there, but the limb nearest the window is not. The Hathaway house is also where Mosby friend Fountain Beatty met his future wife Anne Hathaway.

Other landmarks that I often pass on my trips are Mount Zion Church, Aldie Mill, and Lakeland, where Mosby was seriously injured. A place that is out of the way, but one I intend to go back to is Wheatland, where Mosby was taken to remove the bullet he received at Lakeland. It stood in the middle of a cow pasture and was falling down last time I was there. It has probably collapsed into a pile of rubble by now. (Sad!)

It’s so much fun to visit the actual places that you read about in history books. It’s also sad to see so many people racing by and not realizing how much history surrounds them.